The last letter that John Wesley wrote was to William Wilberforce, a man who had been converted under Wesley's ministry and who was a member of Parliament. The letter concerns his opposition to slavery and encouragement for Wilberforce to take action for change. Parliament finally outlawed England's participation in the slave trade in 1807.[1] 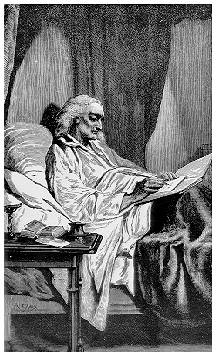 Unless the divine power has raised you us to be as Athanasius contra mundum, [2] I see not how you can go through your glorious enterprise in opposing that execrable villainy which is the scandal of religion, of England, and of human nature. Unless God has raised you up for this very thing, you will be worn out by the opposition of men and devils. But if God be fore you, who can be against you? Are all of them together stronger than God? O be not weary of well doing! Go on, in the name of God and in the power of his might, till even American slavery (the vilest that ever saw the sun) shall vanish away before it.

Reading this morning a tract wrote by a poor African, I was particularly struck by that circumstance that a man who has a black skin, being wronged or outraged by a white man, can have no redress; it being a "law" in our colonies that the oath of a black against a white goes for nothing. What villainy is this?

That he who has guided you from youth up may continue to strengthen you in this and all things, is the prayer of, dear sir,

Graphics
The drawing near the top of most the web pages for Holiness of Heart and Life depicts the Reverend John Wesley (1703-1791) at age 48. All of the black and white drawings have been scanned by Nancy A. Carter for the General Board of Global Ministries, United Methodist Church from public domain nineteeth century or early twentieth century Methodist history books. Please acknowledge this web site, John Wesley: Holiness of Heart and Life, http://gbgm-umc.org/umw/wesley/, if you reproduce these. We now have some graphics available in high resolution format, suitable for print media.

The graphic of John Wesley writing his letter to William Wilberforce was scanned from A. B. Hyde, The Story of Methodism Throughout the World (Springfield, MA: Willey & Co., 1889), p. 237. and is in the public domain.